We’ve spent the last few days at HIMSS in Chicago, learning about all things HIT and are happily back to our respective homes. Even though HIMSS traditionally draws mostly hospital IT folks, the conference included a physician EHR track and many ambulatory EHR vendors were represented. 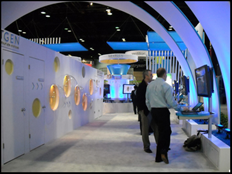 Probably our favorite booth was NextGen’s, which had somewhat of a outer-space feel to it. During HIMSS NextGen announced the development of NextGen EHR Mobile, an add-on to NextGen’s EHR software. The new module will run on mobile devices, including iPhones, but won’t be available for a few more months. NextGen was also recognized as a winner of the MSHUG 2009 Innovation Awards in the area of ambulatory care clinical care, along with its client Elmhurst Clinic (IL). And, NextGen announced a new “Money-Back Guarantee” program that includes a promise their solutions will continually evolve to meet the federal government’s requirements for stimulus reimbursement.

Assuming NextGen maintains CCHIT certification, honoring that guarantee won’t be too difficult. Sitting in on a CCHIT Town Hall, it’s clear that the CCHIT folks believe  that as a minimum, their certification requirements will be the basis for the final federal standard. Over 200 new applications were sent to CCHIT in the last month, suggesting that more vendors than ever are viewing CCHIT certification as a necessity.

The Allscripts booth was right by a major exhibit hall entrance and they leveraged their premium location by making major product announcements each day. Their space was constantly hopping as clients, prospects, and the curious spilled into the aisles to check out their various offerings. One big draw was the new Allscripts Remote product, which gives doctors the ability to access their EHR via iPhone or iPod Touch.While watching a demo of the product, Inga overheard a doctor say, “Here is my credit card! This is exactly what I’ve been wanting!” Music to a sales rep’s ears.

We also snuck into the pre-conference Healthcare IT Venture fair and observed a number of companies pitching for VC dollars. Most were startups, though we observed e-MDs’ Michael Stearns and David Winn present their case for new funding.  e-MDs indicated that they are looking for $5-$10,000,000 to advance development and beef up its infrastructure.The company has grown at an impressive rate since Dr. Winn founded it in 1996, and today 17,000 users across 49 states are using their applications.

And speaking of e-MDs, we are pleased to welcome them aboard as our newest HIStalkPractice platinum sponsor.We appreciate their support of our young HIStalkPractice site.

Overheard while standing in the shuttle line: The relaxation of Stark laws has not driven EMR adoption as quickly as everyone had hoped. Hospitals don’t have enough access to capital to support the physicians and physicians are not satisfied with the current product offerings.

eClinicalWorks and Sam’s Club release details of their new EMR program, which is targeted for the one to three provider space. ECW and Sam’s did a nice job of including all the details of the package directly on the Sam’s Club website. The basic hardware package using Dell equipment is about $12,000; the software purchase price for a solo doctor is just under $20,000; additional providers increase the price by about $10,000 each; SaaS options begin at $12,000 a year. Is it the cheapest solution out there? No. Is it pretty smart marketing on ECW’s part? We think so. Right now the offering is only available in three states, though it will be rolled out across the country by the end of the year.

Greenway Medical Technologies announces a strategic deal with Detroit Medical Center to provide PrimeSuite EHR to physicians across Detroit Medical’s nine hospital network. Greenway had a nice size booth at HIMSS, and while they might not have been as busy as some of their competitors, they appeared to have a constant stream of people checking out their solutions.

athenahealth made a few HIMSS announcements as well, including its launch of a national Clinical Intelligence Team as part of its athenaClinicals and athenaNet PM offering.The team will be responsible for monitoring various stimulus programs to ensure delivery of the maximum allowable benefits for clients. athenahealth also released word that their e-prescribing service just received additional Surescripts certification. athenahealth also shared news of the successful implementation of athenaCollector at the 130-provider Hudson Headwaters Health Network (NY). Kudos to athenahealth’s CEO, president, and chairman for winning HIStalk’s Healthcare IT industry figure of the year award. Bush and other athena folks attended our HIStalk/Ingenix reception Monday night and Bush was busy snapping photos of the whole event.

Speaking of the reception, the ehrTV.com crew were also on hand taping the HIStalk awards presentation.We had a few audio issues but hope Dr. Fishman and team were able to capture a bit of it. Of course we will let readers know when they can see highlights of that very fun evening.

Inga attended a session featuring the 2008 Davies award winners in Ambulatory Care. The practices varied in size from solo physician to 85 doctors, but the three presenters shared a few consistent messages. All agree that picking the “right” company to partner with is important, that implementation success depends on energetic leadership, and that in the end, EHR is just another office tool. Each shared stories of how paperwork was reduced, workflow was re-assigned across their practice, and overall efficiencies gained. On the HIMSS website you can review manuscripts that detail more specifics on each practice and the implementation process. If you are looking to add an EMR, the documents are worth a read.

As noted above, everyone seems to be jumping on the iPhone wagon with Epocrates clearly making its mark as one of the most widely used iPhone applications for physicians. More than 10% of US physicians (about 75,000) are using the tool just nine months after its introduction.

Not surprisingly, the overriding theme this year was the economic stimulus package and how you could get your piece of it. Both vendors and industry professionals stressed the need to move sooner than later, so it will be interesting to see what type of momentum shift we see over the next few months. Questions still linger over the definition for “meaningful use” and “certified” products, but we do know that interoperability and e-prescribing will be key requirements. If you attended, let us know your impressions.