From the Pediatric Trenches

That is how I was going to start this offering. However, after traveling to Dallas to give a talk for Eclipsys’ EUN and flying directly from there to direct the “Pediatric Office of the Future” exhibit at the American Academy of Pediatrics’ National Conference and Exhibition in Washington, D.C., somewhere en route I encountered a virulent little chest-congester, sinus-stuffer, feel-like-heller of a cold germ. While very grateful it isn’t the H1N1 variety virus, it is nonetheless one powerful little booger. Thus, my writing has been delayed by both overwork and, now, by oversnot.

Here in HIStalk Practice land, I’d like to share with you what I recently experienced at the above-mentioned AAP Peds Office of the Future or “POF.” (I’d give you a bigger picture view, but the work kept my leash pretty short, thus keeping my view of anything beyond the exhibit hall quite limited). It was not the experience I expected. Let me explain…

As many of you know, with the economic downturn, many conferences are experiencing reduced attendance and diminished vendor participation. The American Academy of Family Practice (AAFP) held their annual conference up in Boston just before the AAP show and, by all the reports I received, had a decline of around 30% in attendance. (Unconfirmed.) I was worried we would experience the same. However, much to my most happy surprise, pediatricians and their entourages turned out in record numbers! From all around the globe, the pediatrically-inclined came and saw and conquered … OK, maybe the only thing they conquered was the dreary D.C. weather, but they for sure turned out. 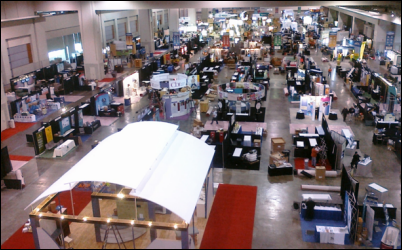 View from the ceiling during set-up. POF is white-canopied booth in front.

Top off a record-setting attendance with an exhibit hall floor which, to my completely subjective view, was one of the most broad-swept product and informational offerings I’ve ever seen and you have a real event. Our POF exhibit also had a nice breadth of sponsors. With your indulgence, I’d like to take a moment to gratefully acknowledge them here: athenahealth, Doctations, Eclipsys, Sage, Medicomp, PediaPals, QuickMedical, and (a special thanks, Mr H.) HIStalk Practice. I also would appreciate your forbearance while I acclaim the good folks who represented each of these companies: I cannot begin to describe the wonderful efforts of every single one of the representatives from each of them. Each was more pleasant and more enjoyable with whom to work than the next.

If you didn’t make the AAP show this year, you missed out. Well done, AAP. If you did, and if you happened to come by the POF, I’d certainly appreciate your input on how we can make it better for next year in San Francisco (woo hoo!) Please send along your thoughts in an email to me or add them to the comments section after this post. We already have some great plans and sponsors, but want your ideas.

For all you vendor types who are reading along, take note: pediatricians are showing up, despite the economy, and their interest in moving forward with HIT has finally started to ascend. (We’ve been a bit behind the learning curve, but it’s looking like we’re about to play some catch-up.)

One last thanks: Mr. H sponsored a very informal meet-and-greet happy hour which I admit I didn’t really advertise to any extreme. (I think I was a little reluctant from a “who’d care about meeting me” perspective.) While I didn’t think anyone would show up, actually a nice little smattering of folks made it by, some friends, some now-friends, and I learned some good stuff and had some great chats (despite feeling like warmed-over death from the bug.) Thanks, Mr. H … and thanks to all who stopped by.

From the (pediatric) trenches …

“I believe in equality for everyone, except reporters and photographers.” – Mahatma Gandhi