It’s situations like these that give insurance companies a bad reputation. CalOptima loses claims data for 68,000 members, including substantial identifying information. An HIStalk reader tipped us off on to the letter posted on the CalOptima home page. CalOptima says its scanning vendor sent an it unencrypted DVD that was never received. A PR nightmare, not to mention a huge privacy mess.

Here’s a figure I haven’t heard. On average, a breached medical record costs $211 to remediate. We’ll see whether or not CalOptima’s mess costs north of $14 million to resolve.

Virtua, a multi-hospital healthcare system in New Jersey, selects NextGen EHR for its Medical Group network. In addition to implementing NextGen across its 23 locations, Virtua will offer NextGen EHR to its community-based physicians.

Don’t know why this random thought came into my head recently, but while at MGMA this month, I sat through a few demos. I recall asking the young man (why do they all seem so young?) showing me the product if the software could do a certain function. Instead of a simple, “Yes,” or even, “Yes, would you like to see how?” he proceeded to give me a long drawn-out description of the company’s philosophy and history as it related to this particular function. At some point, I zoned out and was ready to go to the next booth. The point here is: if you are the one demonstrating software, and someone asks you what time it is, it’s rarely necessary to explain how a clock works.

Florida physician Dr. Edgar R. Blecker goes live on PWeR, the first doctor with Renaissance Health System to do so. The press release says Renaissance has over 2,000 affiliated physicians, but there’s no mention of more doctors going live on the EHR.

EndoSoft jumps into the physician EHR market with its launch of EndoVault EHR.

Rhode Island becomes the first state to use e-prescribing records to track the spread of swine flu statewide. A brilliant example of using HIT to improve patient care (although the tracking is based on prescriptions of Tamiflu and other antivirals). Maybe things are different in Rhode Island, but in many parts of the country, physicians are reluctant to prescribe antivirals, so maybe the data isn’t all that helpful (although the directional trend may be valid). Still, I like that someone is at least trying to use that data for more than tracking prescribing trends. 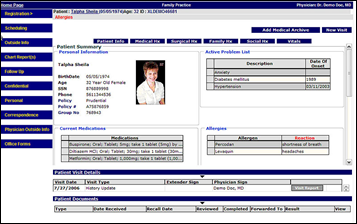 MedAssets Supply Chain Systems will distribute the MedAppz iSuite EHR to the non-acute, ambulatory healthcare provider customers of MedAssets. The multi-year agreement will allow MedAssets to offer the EHR as a SaaS solution.

With new players expanding into the EHR market and established hospital-system vendors trying to make a mark, one has to wonder how some of these tiny EHR vendors can survive. For example, Waiting Room Solutions just announced a couple of new sales. I went to their Web site and learned that for as little as $429 per month, you can purchase a Web-based EMR & PM packaged solution, which includes maintenance. Training is available via Webinar or with a self-guided video and demos are available via the Web. The site says nothing about a leadership team, suggesting little deadwood at the top. I suppose when you don’t have a lot of overhead from sales, training, and management you can operate on a slim margin, but will they be around in five years?

Sequel Systems introduces an integrated patient portal application that will work with its existing PM and EHR solutions.