A KLAS report takes a look at Allscripts a year after its merger with Misys. KLAS surveyed 200 Allscripts clients and found declining customer satisfaction in several key areas. The release of v.11 created challenges, though clients on versions 11.1.5 or higher are seeing positive results. About 85% of Misys EMR users who plan to replace their EMR say they’ll go with Allscripts Professional EHR, which is being offered at a relatively low migration price. KLAS notes that Allscripts also remains the “most-considered” vendor in outpatient EMR purchases. In yesterday’s HIStalk I make a somewhat snarky remark about the “most-considered” stat, but a reader pointed out that this particular metric is indeed valuable because it indicates which vendor is getting the “most looks, most RFP’s and most demos” and thus is in the running for more sales. 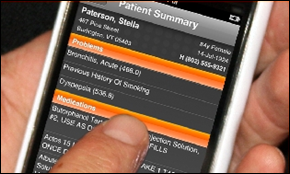 Despite setbacks from high-profile companies like Walmart, the retail clinic sector is on pace to grow 10% over the next two years, then accelerate to more than 30% per year in 2013 and 2014. This new study suggests that patients are willing to use the clinics, especially if it costs less than seeing their doctor and if the location is convenient. The market will continue to face a few challenges, including opposition from physicians who advise patients to avoid retail clinics. 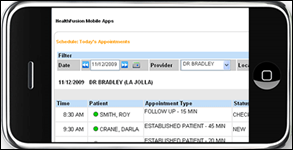 HealthFusion (no relation to the Fusion company above) launches its HealthFusion Mobile Apps, enabling physicians to use their mobile device to view office schedules and patient eligibility information. HealthFusion’s next release will include a charge capture component.

This Washington Post article provides insight on how actual patients are using the Intel Health Guide home health monitoring system. The device allows patients to easily input such data as blood pressure, weight, and glucose levels. The information is then forwarded to the patient’s physician. The participating patients are part of a pilot program that researchers hope will prove home monitoring programs can improve patient outcomes and reduce costs. Most insurance carriers are not reimbursing patients for the cost of the devices (which rent for about $100/month) or for the physicians’ time.

The Alzheimer’s Association offers its new Comfort Zone program, which helps caregivers track the movements of Alzheimer patients via a Web-based mapping tool. Using technology originally designed to track prisoners, families purchase a $200 transmitter and then pay $43 to $80 for a service plan.

The OMB says that about 5% of federal spending was paid improperly in 2009, including about $54.2 billion for Medicare and Medicaid programs. Those programs actually had improper payment rates of 15.4% and 9.6%. I believe OMB Director Peter Orszag wanted Americans to feel encouraged because better detection methods have uncovered more improper payments than in the previous year. Orszag cites the example of an invalid doctor signature, which was much more likely to trigger an improper payment in 2009 than 2008. Perhaps, but what private industry would tolerate a 15% improper payment rate?

The Amalgamated Order of Real Bearded Santas is lobbying to ensure that the nation’s Santas are given priority for H1N1 flu shots. The Santa crowd argues that most Santas are could be high risk: two-thirds of all Cris Cringles are overweight and one-third are morbidly obese. Not to mention that no one wants the big guy to be sick when it comes time to hitch up the reindeer and deliver presents.