Girish Kumar Navani of eClinicalWorks wins a 2010 Business Leader of the year award, presented by Worcester Business Journal. The newspaper includes an interesting profile on Navani, who won in the Big Business Leader category. Navani provides some history on the company, which is now in its 10th year. My favorite comment comes from the Micky Tripathi, CEO of the Massachusetts eHealth Collaborative. Tripathi calls Navani “an unbelievable salesman.” I love sales types, and I agree with the assessment. 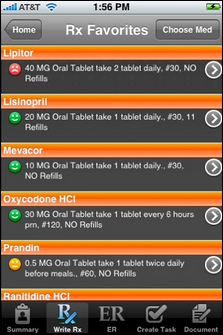 If you are looking for an EMR to work with your iPhone, MobiHealthNews provides a list of 12 applications with iPhone capabilities. By this time next year, I bet we’ll have more EMRs with iPhone apps than without.

Allscripts CEO Glen Tullman is quoted as saying his company will hire another 250 people in coming months in sales, training and solutions management. Tullman also says the company’s workforce grew 10% last year, to about 2,500.

HIE provider Medicity announces a 91% increase in bookings in 2009 versus 2008 and a 35% increase in its five-year revenue backlog.

Two community health centers are partnering with Cisco, the HMO Molina Healthcare, and the state of California to establish a $10 million telehealth pilot project to provide health services to underserved communities. More than 15  sites will be connected over the next six months.

eClinicalWorks signs a big order with Summa Physicians (OH) to provide EMR for its 223 physicians. Summa Health Systems is already an eCW client, having contracted with eCW in 2006 to provide EMR and PM solutions for its community physicians.

Tomorrow’s question in part five our EMR Executive Series on Meaningful Use and Certification Requirements: Was there enough emphasis on clinical decision support and interoperability?

NoMoreClipboard announces a new patient portal that allows patients to create their own PHR and share clinical and financial information with their providers.

Technology is making “participatory medicine” an easier alternative for providers. Proponents of involving patients more into their own care process believe it can increase patient satisfaction, save time, reduce costs and improve care. Other benefits for physicians: reduced liability risks and possibly a new revenue stream for online consults. It’s all about getting doctors to use the tools, such as email, PHRs, patient portals, home monitoring devices, and social networking sites.

An Ohio woman tampers with her own medical records to make friends and co-workers believe she has breast cancer. She apparently used a computer to cut and paste her doctor’s signature from a legitimate medical record and then added it to a fake one that indicated she was being treated for cancer. Her concerned co-workers raised $7,000 to help offset medical bills, though she actually resisted the help. Eventually the doctor learned about the false documents and notified police. She’s now been charged with two counts of felony forgery. Her motive was unclear though her family says its not the first time she has faked a cancer diagnosis. By the way, I think I have tennis elbow in case anyone wants to send money my way.