CCHIT files its comments on the Interim Final Rules and warns that the currently proposed standards might slow the pace of EHR adoption. Dr. Mark Leavitt points to the omission of standards for receiving lab results and for exchanging clinical standards, even though widely support standards already exist. CCHIT also says that some of the proposed functions are too microscopically defined, while others are still undefined.

Meanwhile, CCHIT says it is suspending any initial or incremental modular testing until it has an accredited Stage 1 ARRA test script to use. A note on their website also indicates that CCHIT is “confident” about its prospects for becoming accredited.

And, Drummond Group re-affirms its desire to be certified as a authorized testing and certification body. The company is making internal preparations and plans to be ready for EHR testing later this year.

The Senate passes legislation that would allow certain hospital-based physicians to qualify for incentive payments under ARRA. The amendment excludes ER physicians or those furnishing substantially all their services in an inpatient room. However, the legislation would make eligible physicians working in ambulatory facilities owned by hospitals. The provision was part of a jobs bill that now moves to the House for further consideration. If you recall, the House had included similar wording in a bill a couple weeks ago, but it was stripped at the last minute. Don’t spend those stimulus pennies yet.

After delaying the release its numbers, athenahealth posts a decline in profits and jump in revenue for Q4 and 2009. athenahealth restated its financials going back to 2005 as a result of an internal accounting policy review, initiated by the company, and related to the timing of amortization for deferred implementation revenue. For Q4, revenue grew 33% over 2008’s numbers, to $54.4 million; for the year, revenue jumped 38% to $188.5 million. Reported GAAP net income, however, fell 84% to $4.3 million in Q4, compared to $26.8 million a year ago; annual net income fell from $31.5 million to $9.3 million. The $.17/share earnings were in line with analyst expectations.

Vitalize Consulting appoints Tim McMullen its executive VP of sales. McMullen most recently served as a VP at maxIT Healthcare and was a national VP and partner with First Consulting before that.

Sales types be warned: physicians report that their offices are visited by up to 20 sales reps each week from the pharma or medical device industry. No wonder doctors have no time to hear about your best-thing-since-sliced-bread EMR. Half the physicians say they require or prefer reps to schedule one-on-one appointments.

Edge EHR Corp. announces plans to acquire Goal Software, a provider of practice management software for the eyecare industry. Edge is hoping some of Goal’s 700 providers add its EdgeEHR application. 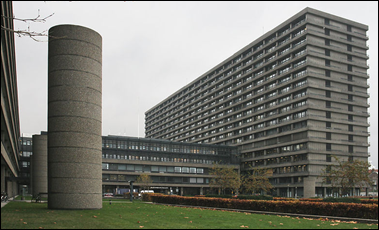 One hundred percent of primary care doctors in Denmark use EMRs and almost all medical communication between providers, specialists and hospitals is electronic. The government made EMR use mandatory in 2004, and in 2009 doctors were required to use email to communicate with patients. To spur adoption, the government used financial incentives to physicians, including faster re-imbursement and payment for patient-doctor email consults.

Marquette General Health System plans to deploy McKesson’s Practice Partner EHR to its 140 employed clinicians across 30 owned physician practices. In addition, the hospital expects dozens of independent affiliated practices to adopt Practice Partner as well. The hospital will integrate the EHR with its Paragon HIS.

BCBS of Western NY and Blue Shield of NE-NY are the latest carriers to agree to cover telehealth services for patients connecting to providers via the American Well Online Care platform.

AdvancedMD hires William H. Stone as its VP and GM of Billing Services. Stone joins AdvancedMD after 11 years at MED3OOO where he served as corporate VP of Business Development.

A Gerson Lehrman Group report suggests that EHR adoption is growing faster than once predicted. Physicians have finally begun to realize that they will have little choice but to go electronic in order to maintain a viable professional existence. Physicians are now concluding that if they must do it, they might as well get as much from the federal government as possible. The report suggests we will soon see a “tipping point” toward widespread adoption of EMR. Perhaps, although it seems the “experts” have been saying we’ve been on the verge of a tipping point for the last 10 years. 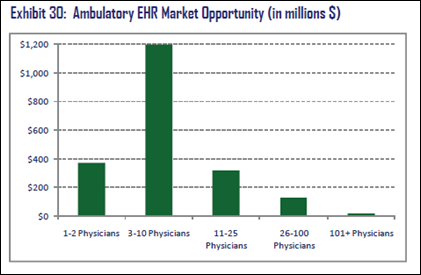 CapSite sent over a copy of their very juicy 2010 U.S. Ambulatory EHR Study, which looks at the market’s response to the HITECH component of ARRA. The company sees an opportunity of more than $1 billion in net new business in the 1-10 provider space and $2 billion across the whole ambulatory EHR space. In other words, when we hit that tipping point, it’s going to be mighty big. The report is a good read, if you want to get a handle on today’s market.