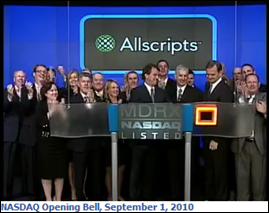 Allscripts-Misys and Eclipsys are now Allscripts Healthcare Solutions, as the merger is finalized. To celebrate, Glen Tullman, Phil Pead, and a dozen others rang the opening bell on NASDAQ. Familiar name, but new logo, new color, and a  new leadership team, with Allscripts-Misys alums taking most of the top spots.

Speaking of athenahealth, I see they have added an amusing 2-minute video to their site called “Tame the Beast.” Jonathan Bush’s larger-than-life personality is one of the company’s best assets, in my opinion, and this clip highlights JB’s ability to effectively deliver his message with deadpan humor. It’s worth a look, even just to see the cameo of his beautiful daughter.

Jonathan Bush’s cross-town competitor, Girish Kumar Navani of eClinicalWorks, is named as one of 16 recipients of a Mass High Tech 2010 All-Stars Award. The award recognizes “dynamic and influential leaders of New England’s innovation economy.” He took top honors in the Health IT category.

The number of readers tuning into HIStalk Practice continues to grow. In August, we once again exceeded 10,000 visits, which is up 52% from a year ago. Thanks for stopping by and telling your friends. Of course, thanks to our sponsors, especially those very first ones a year and a half ago who took a gamble that HIStalk Practice would make it past the first couple of slow months! Their love helps fund my shoe budget, which in turn contributes to world beautification.

The local business journal says the 281-provider Austin Regional Clinic (TX) is shopping for its first EMR. Austin-based e-MDs is said to be in the running, though the clinic is working to create its short list of just three or four vendors.

Weno Healthcare applies to be an EHR authorized certification and testing body (ATCB). Weno, which already has an EHR testing and certification program, also offers a free SaaS-model EMR (or $1,000 for a "government certified version”) and an e-health community to connect providers. A quick tour about Weno’s Web site left me with the impression that the company runs a much smaller operation than CCHIT or Drummond Group.