From InfoGard: “Re: ONC-ATCB. InfoGard Laboratories will complete the mandatory ATCB training conducted by ONC this week (week of 9/20). We are required to make any changes to our testing procedures and process for EHR testing after completing the mandatory ONC training.  We expect to be able to start the testing process the week of October 4. We will begin providing testing process information and taking applications the week of September 27.” No word yet on pricing.

Carilion Clinic (VA) and The Everett Clinic (WA) deploy Humedica’s clinical analytic and benchmarking tool to compare care delivery among its physicians and across other medical groups. Sounds great for prepping for ACO participation.

A third of office-based providers are now e-prescribing, according to Surescripts. However, only 12% of all prescriptions were written electronically last year. The number of providers using electronic prescribing grew significantly from 2008 to 2009, from 74,000 to 200,000, while the total number of e-prescriptions jumped from 68 million to 190 million. Massachusetts had the highest e-prescribing rate at 57%, followed by Rhode Island and Delaware. 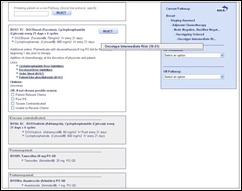 The Association of Northern California Oncologists selects Via Oncology Pathways as the preferred cancer treatment protocol option for its 400 members. The Pathways Portal application is Web-based and enables oncologists to apply the pathways at the point of care.

Practice Fusion announces its first-ever user conference, to be held November 5th in San Francisco. Just like their EHR software, there’s no charge for the one-day Practice Fusion Connect 2010 event.

HCA-owned Ocala Health System (FL) buys Family Care Specialists, a 27-provider practice with seven locations. As part of the deal, HCA will provide the practice with resources to implement an EHR. 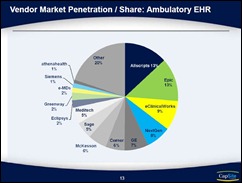 CapSite releases a new analysis of the ambulatory EHR and practice management market, based on insight from over 2,000 practices. Key findings include: 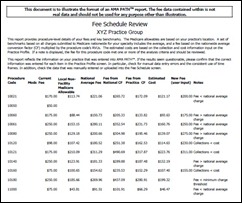 The AMA introduces a set of self-auditing tools for developing and evaluating fee schedules and billing safeguards in preparation for billing and payment audits. The Practice Analysis Tools for Healthcare includes tools to develop a practice-specific fee schedule and compare it against national average billed charge amounts. Physicians can also analyze their coding and billing patterns and compare them against national averages by specialty.

Housekeeping tips: sign up for e-mail updates so you never miss a post. Keep my in-box full by e-mailing your rumors, comments, content suggestions, and shopping tips. Share the love with our sponsors by clicking on their links and perusing their offerings. If you are interested in becoming one of our cherished sponsors, click on the sponsorship tab at the top of the page. Oh, and thanks for reading!

A malpractice insurer finds that 35% of physicians aren’t aware that by 2015 the government plans to penalize practices that haven’t implemented EHRs. However, more than half of those who were unaware say the penalties won’t cause them to implement EHRs. As usual, cost was the top concern for physicians, followed closely by staff training.