Sermo releases a mobile version of its online networking site. Sermo Mobile includes a feature called iConsult, which allows a physician to take a photograph of a physical finding, add a question, and send it to relevant specialists in the Sermo network.  The demo looks pretty slick. I must say I would have loved to have that capability when I was self-diagnosing my bed bug bites last month.

On this day in history: CMS issued Stage 1 Meaningful Use rules one year ago. Since that time, CMS has paid $94 million in Medicare EHR incentives and 14 states have paid $166 in Medicaid EHR incentives. 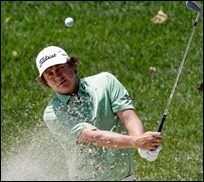 Greenway Medical Technologies lends its support to PGA Tour professional Jason Dufner, who will display the Greenway logo on his shirt in upcoming tournaments. I guess when your CEO’s name is Tee Green, it’s hard not to support golf.

The Bulletin Healthcare folks tell me that the iPhone and iPad continue to dominate the physician market. Bulletin’s research shows that 76% of physicians with smart devices utilize iPhones, 17% use iPads, and 6% have Androids. Bulletin also notes that the use of mobile devices to read Bulletin’s daily eNewsBriefings (which includes 400,000 physician subscribers) has jumped 65% over the last year.

The Physicians Foundation awards the University of North Carolina at Chapel Hill a $750,000 grant to  to develop a projection model to track physician shortages across the country.

Practice Fusion is hosting its free Practice Fusion Connect 2011 meeting November 11th in San Francisco. The company also announces that over 100,000 medical professionals are using its services, up from 55,000 at the start of the year.

Physician incomes in 2010 were flat compared to previous years, according to physician recruiting company The Medicus Firm. Average compensation fell 0.14%, though emergency medicine doctors saw a 5.5% increase and psychiatrists earned 11.5% more. Declining re-imbursements were cited as one of the major factors affecting income.

Allscripts adds four senior execs to its leadership team including Cliff Meltzer as EVP of solutions development, Steve Shute as EVP of sales, Jackie Studer as SVP and general counsel, and John Guevara as CIO. Meltzer is an Apple, Cisco, IBM, and CA Technologies veteran and replaces the now retired John Gomez. Long-time IBM-er Shute replaces Jeff Surges, the current CEO of Merge Healthcare. Studer (GE Healthcare) takes over for Kent Alexander, and Guevara (Microsoft, Intermec, Siemens) is Allscripts’ first CIO.  Allscripts also announced the department of COO Eileen McPartland, who is leaving to become CEO of a private company outside of the healthcare industry. Finally, Allscripts provided preliminary Q2 financial numbers, which included expected bookings of about $240 million and profits and revenue above analysts’ expectations.