Speaking of Greenway, despite sporting a Greenway logo on his shirt, PGA golfer Jason Dufner failed to make the cut  following the second round of the British Open. 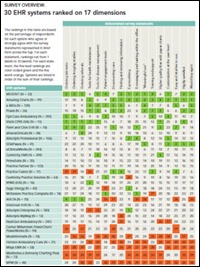 A reader forwarded me a copy of the results of AAFP’s 2011 EHR User Satisfaction survey, which includes the opinions of 2,719 family physicians. AAFP is careful to point out the limitations of the survey (it did not consider software release levels, participants were self-selected, sample sizes were small for some products) and notes that its goal was not to identify “winners.” Still, there are a few interesting nuggets to consider:

The British Medical Association recommends that healthcare professionals and medical students “politely refuse” Facebook friend requests from patients. The AMA, by the way does not explicitly recommend refusing social networking requests from patients, but advises physicians to maintain boundaries “appropriate” for the patient-physician relationship.

Phil Suiter, the new president and CEO of EMR vendor digiChart, says he was hired to perform a “strategic repositioning” of the company. The Nashville Medical News profiles Suiter, who has founded or led multiple healthcare businesses over the years. He notes that digiChart’s revenue has been stuck at the $10 million level for some time. The company is now rolling out PracticeSmart, a combined EHR/PM solution, and will continue its focus on the OB/GYN market. With the industry consolidation trend, Suiter is no doubt positioning the company for potential acquisition:

“When consolidation comes, you ride it to the top of the wave; and then you see what best opportunities are out there, and you make yourself available to that. That’s probably what we’ll do.”

Office Ally announces that all of its offerings will run on Apple products, including Macs and iPads.

The American Academy of Dermatology will expand a telemedicine pilot that connects dermatologists with primary care physicians. Physicians in 26 clinics use a special cell phone that includes software to support the transmission of photos and patient records to the consulting dermatologist. The 15 participating dermatologists provide the consults at no charge to the patient.

You apparently can teach old dogs new tricks. Physicians who have been in practice 31 years or more are about as likely as those just out of medical school to own a tablet computer or to purchase one.  Thank Apple for making the iPad, a device that all generations seem to agree provides a great mix of portability and ease of use.

Results from a couple of global studies indicate that two-thirds of patients around the world feel disrespected by their physicians. Unclear communication is the top reason. Patients also complain that doctors don’t spend adequate time with them and are not punctual for appointments. Chinese patients are the most unhappy with their doctors and have the largest percentage of patients quoting Rodney Dangerfield.