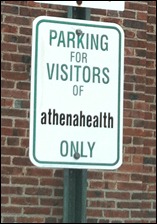 My recent big adventures around the Boston area included a visit to athenahealth’s headquarters in Watertown. athenahealth’s offices are in a decommissioned World War II military arsenal near the Charles River. The main building is in a 111,000 square foot facility that has been transformed from its original cavernous shell to a more functional office building, but keeping its brick walls, warehouse atmosphere, and abundance of natural lighting. 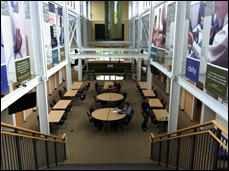 John Hallock, athenahealth’s director of communications, met me at the company’s adjacent smaller building, which holds executive offices, the corporate cafeteria, and customer training rooms. It has conference rooms, and for less formal gatherings, tables and couches in open areas. 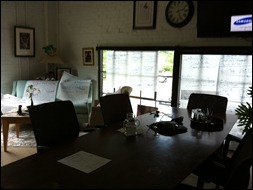 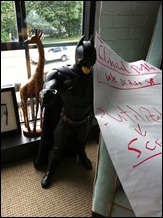 The company was in the midst of an off-site sales meeting, so a good number of employees were out the office, including CEO Jonathan Bush. However, I took at a peek at his office, which was  as eclectic and scattered as one might think if you have ever experienced the hyper Bush. It has no desk per se, just a conference table, since Bush apparently likes to work standing up.

The windows, couch, and walls were covered with giant Post-it notes, which Hallock joked could very well represent athenahealth’s five-year operating plan. In addition to lots of photos of Bush’s five kids, there are pictures of some of his more politically connected family members and his celebrity brother. I am not quite sure what the two-foot Batman figure was all about, but it seemed appropriate.

Hallock then took me over to the main building, which serves as home base for the rest of athenahealth’s 800 Watertown employees. I found the Network Operations Center (NOC) particularly impressive. The NOC is a single room with multiple monitors that display aggregated performance metrics for athenahealths’ hosted systems.

Employees monitor performance 24×7 (the third shift is covered by offshore workers) and can pinpoint performance issues down to the individual practice level. On that particular day, employees were tracking the system performance of a large practice that was going live.

The overall layout of the building was interesting. athenahealth handles payment posting and insurance follow-up for its clients, which means designated employees have access to vast amounts of personal health information. For that reason, corridor walls are curved to minimize unintentional viewing of data.

Departments are segmented into large work areas with high ceilings, huge windows, and low-profile cubicles. Modest-sized offices and conference rooms are sprinkled throughout. Employees can decorate their work spaces and the variety suggests an abundance of creativity. In both buildings, framed news articles featuring athenahealth and Bush adorn the walls. 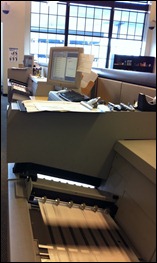 The company scans literally every financial and clinical document that comes in the door using the most sophisticated scanners I’ve ever seen. In every work area and hallway, monitors display the status of incoming support calls and visually flag those that have been holding for too long.

athenahealth has preserved the best of the complex’s arsenal roots with the technology and infrastructure needed to support its creative employees.