From Elvis 2.0: “Re: MGMA picks. MGMA has posted a series of ‘Webisodes’ highlighting the details of this year’s conference, exhibit hall events, and fun stuff to do while in Las Vegas. Thought you might be interested to know that on Sunday afternoon, you can watch Cirque du Soleil in the exhibit hall while drinking wine and beer.” I am so there. Elvis also recommends the Healthcare Innovation Pavilion, which features 20-minute educational sessions on a variety of topics. Sounds like a good pick, given my limited attention span. 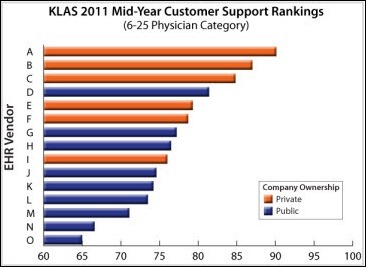 In his latest blog post, SRS CEO Evan Steele  makes an interesting observation about customer satisfaction and company ownership. Turns out that in the latest KLAS rankings,  five of the six top EHR vendors are privately held, while the bottom six vendors are publically traded. Steele’s theory: publicly traded companies are beholden to Wall Street and may sacrifice product and support issues in favor of earnings, while privately held companies are accountable first and foremost to their clients. I am guessing one of the top three vendors is Greenway, which is the process of going public. Based on Steele’s theory, it will be interesting to compare their current rankings with those a year from now. 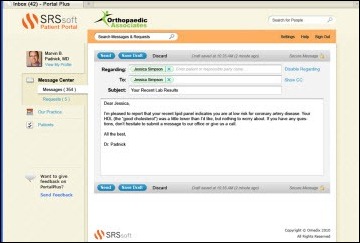 Speaking of SRS, the company announces a partnership with Omedix to incorporate Omedix’s patient portal technology into the SRS EHR.

3M Health Information Systems releases a new version of its 3M Coding and Reimbursement System, which includes an ICD-10 Readiness Tool. The upgrade, which is free to current 3M coding clients, features a translation window that allows coders to complete ICD-9 to ICD-10 code translations.

The local paper highlights Westport Family Medical Center’s (MA) September 12 implementation of eClinicalWorks. The office manager notes that, “Six months from now everyone will love it, but getting from A to B will be arduous,” while one of the doctor says, “This week’s much better than last week and I expect next week to be close to not a problem.” I’d say they have the right attitudes. 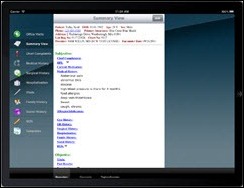 eClinicalWorks, by the way, introduced several new products at its National User Conference this week: