On Monday, ONC head Farzad Mostashari led a session on Meaningful Use and “other critical topics.” Only about 100 people attended, which surprised me a bit.  On the other hand, Meaningful Use and HIT are but one area of concern for practice administrators. A few highlights:

Mostashari also took several questions from the audience. Based a few of them (regarding ICD-10, for example,) some audience members didn’t fully understand what the ONC really does. A few points from the Q&A:

As a presenter, Mostashari is engaging, personable, and quick on his feet. It was definitely my favorite session of the conference.

Tuesday morning’s keynote speaker was Eric Dishman of Intel’s Digital Health Group. I am going to try to track him down because I think he’d be a great interview for HIStalk. His presentation was billed as "Home and Community-based care Technologies for Independent Living,” and he went into a fair amount of detail about various emerging technologies, such as kinetic motion monitoring, implantable medication compliance devices, and tools to automate the documentation process. Dishman made a great case for the need for technology that shifts patient care out traditional settings and seems confident that we’ll see a flood of innovation over the next 10 years.

I spent about 10 minutes in a remedial session on technology. Its content targeted individuals who were not IT experts, but were perhaps responsible for taking care of the office’s IT needs. I suppose it’s a great topic for certain office managers running small offices, but I walked out when the presenter began to explain the difference between a server and workstation.

As I walked down the hall looking for an alternate session on patient interaction technologies, I noticed a standing room only crowd for a session on building successful physician/hospital relationships. Obviously the average administrator is far more interested in that topic than the HIT stuff.

In the exhibit hall, I sat through a couple of 20-minutes sessions on PQRS at the Healthcare Innovations Pavilion, where I think it was only vendors presenting. The ones I saw were well done and perfect for my 20-minute attention span.

I’ll be doing a meeting wrap-up tomorrow, but here are a few more pics. 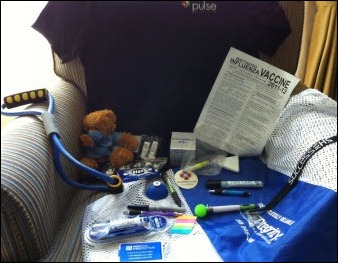 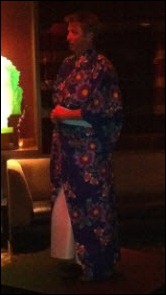 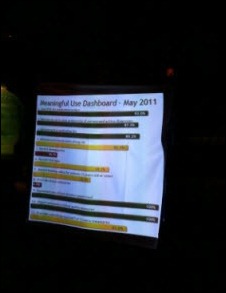 athenahealth hosted a fun event Monday night at the Tao in the Venetian. I think the event was billed as the Opening of the Kimono, starring the kimono-adorned Jonathan Bush. After a few opening remarks, Bush opened his kimono and an image of athena’s Meaningful Use Dashboard was displayed onto the kimono (the picture on the right.) It was a tongue in cheek representation of athena’s push for EHR vendors to be more transparent and reveal their customers’ level of success fulfilling Meaningful Use requirements. Only Bush could get away with such a presentation. 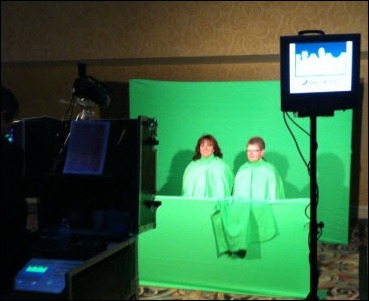 MED3OOO and Phytel co-sponsored a reception for the Primary Care Assembly. Guests had an opportunity to sit in front of a green screen and videographers created a music video of them singing different hit songs. This pair was lip synching to Sweet Home Alabama for their personal video.

I also stopped by Greenway’s party, which was in a dueling piano bar at New York New York. The music was great and everyone seemed to be having good fun. I even had the opportunity to shake hands with CEO Tee Green and the dashing Justin Barnes. 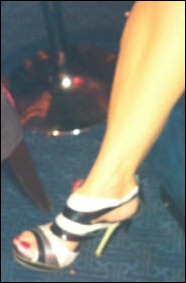