The Soup Nazi. Another Seinfeld expression that has penetrated modern cultural phraseology.

I’m guessing there are very few folks unfamiliar with the Seinfeld phenomenon whereby so many turns of phrase have eked into our communal awareness and lingo from just one TV show, albeit one very cleverly written TV show.

Thus, due to this social phenomenon, I could not help but conjure up the Soup Nazi’s “No soup for you!” when discussing the upcoming HIMSS Annual Conference & Exhibition with a friend the other day. 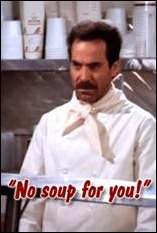 “What in the heck do soup and HIMSS have in common?” you might wonder.

Well, remember when Elaine thought she was ordering from the Soup Nazi? She commented that he looked “exactly like Al Pacino, you know, Scent of a Woman, hoo-ahh, hoo-ahh!” only to have her order for some yummy soup rebuffed with a Gestapo-esque, “No soup for you!”

Similarly, my desire to attend this year’s conference has been “no soup for you-ed” by HIMSS and its schedule change. There’s just no way that I could afford to pay both the costs of attending AND the costs for being away from the office during the majority of a work week. Not unless I use HIMSS as my vacation. (Uh… no… I don’t think so.)

Previously, it was hard enough to attend on the weekend and a Monday or Tuesday. Time away from the office is time when no income is being generated, losing thousands of dollars as bills pile up and still paying staff to man the fort. But, it was doable and worthwhile, especially to be able to attend all the HIStalk fun – i.e., HIStalkapalooza, et al.

I get that HIMSS is more and more oriented toward the vendor world and the large provider institutions, despite the fact that over half of healthcare is still delivered in smaller communities by smaller practices. It makes more sense for them to have their salaried folks come during their regular work week than to pay their people extra to travel/work on the weekend. But for me and, I’m suspecting, most of my small trench ilk, that is the exact opposite logic for our needs.

Then, on top of being “no soup for you-ed” on the event timing, the HIMSS meetings seem to me to have pretty much taken on a “big boys” focus. (No gender discrimination intended.) It makes me sort of miss TEPR – Toward the Electronic Patient Record – Conferences that, while not as well run as HIMSS, had a much greater end user focus with a nice blend of vendor “ooo” and “ahhh” mixed in with meetings and talks that were more useful for us onesy-twosies.

I’m still a HIMSS member, but I feel my membership has been a bit rebuffed just as were Elaine’s comments to the Soup Nazi.

Realizing how late it is to be whining about this and realizing , too, how little effect my whine will have, I nevertheless felt compelled to throw this out into the Internet air, just a mini-bitch on behalf of us little guys who so often get left out of the “soup.”

“Do you ever get down on your knees and thank God you know me and have access to my dementia?” – George Costanza

Dr. Gregg Alexander, a grunt in the trenches pediatrician at Madison Pediatrics, is Chief Medical Officer for Health Nuts Media, directs the Pediatric Office of the Future exhibit for the American Academy of Pediatrics, and sits on the board of directors of the Ohio Health Information Partnership (OHIP).