eClinicalWorks releases a letter from CEO Girish Navani, who recaps 2011 accomplishments and outlines plans for 2011. Some highlights: 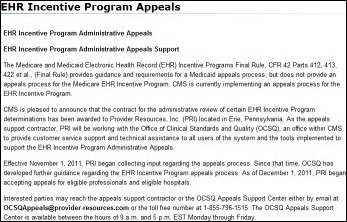 If you are on of the 355 Eligible Providers who unsuccessfully attested to MU last year, CMS now offers an appeals process for both the Medicare and Medicaid programs. Beginning in February, appeal decisions will be posted on CMS’s Website under the Office of Clinical Standards and Quality. 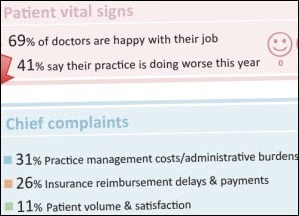 An Internet-based survey  of 1,000 practices finds that 45% of doctors in small to medium-sized offices report their practices are doing better this year compared to last. The top negative pressures facing practices were insurance, reimbursement, and patient compliance issues. 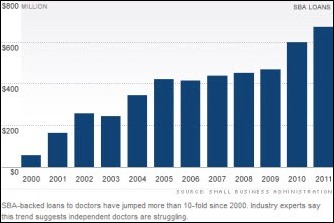 The executive director of the American Academy of Private Physicians (AAPP) says the surge in government-backed to physicians offices indicates the financial struggles of today’s independent physicians. SBA loans to doctors have grown from $60 million in 2000 to $675 million in 2010 as physicians in solo and small offices struggle to make payroll and pay monthly expenses. Decreasing reimbursements, rising costs, and technology investments are contributing to the financial woes of doctors.

Physician referral rates doubled between 1999 and 2009, likely a result of increased specialization in medical care and the increased responsibilities of primary care providers who lack the time required to treat patients with certain chronic conditions. Researchers suggest a correlation between the increase in referrals and rising healthcare costs.