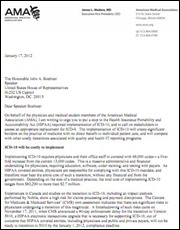 Two weeks after the AMA sent a letter to House Speaker John Boehner urging him to stop the implementation of the ICD-10 coding system, the American Health Information Management Association (AHIMA) tells the healthcare community to keep moving forward on their ICD-10 transition plans. Dan Rode, AHIMA’s VP for advocacy and policy, warns that Congress may not act on the requests of the AMA and others and that stopping implementation would result in “significant financial loss to the healthcare providers, health plans, clearinghouses, technology vendors and the federal government, all who have invested in the transition and have been preparing for the last several years.”

Allscripts announces plans to incorporate speech and language understanding technology from M*Modal into its ambulatory and acute-care EHR platforms.

A Navicure VP outlines some of the more common problems causing rejections or denials of HIPAA 5010 claims, including:

An AMA News article highlights key provisions that providers should consider when contracting for an EMR, including a clear understanding of who owns the clinical data, who can use the data and how, and how data can be accessed, especially in the event a practice and vendor part ways. 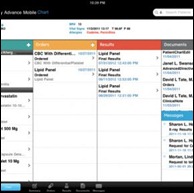 GE Healthcare announces plans to sunset its Centricity Advance product, saying that its flagship EHR/PM solution Centricity Practice Solution addresses similar needs for small and medium practices. GE is giving Centricity Advance clients an option to migrate to a hosted version of Centricity Practice Solution (including data migration, training, and implementation) or to retrieve their data in a read-only format through the end of the year. GE purchased the Advance product (formerly MedPlexus) in March 2010.

Aprima Medical Software partners with DiagnosisOne to provide the latter’s clinical decision support for the former’s HER. 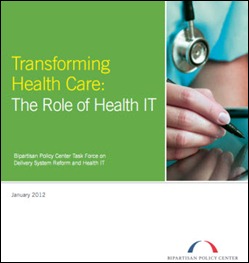 The Bipartisan Policy Center reports on the state of EMRs and other HIT tools, noting that the lack of health information exchange is a major obstacle, as is the lack of PHR adoption by consumers. The Center’s recommendations include the development of a viable business model that gives providers a financial incentive to share information. To engage consumers, the government is advised to address gaps in privacy, security, and accuracy of records and to take steps to raise awareness of technology; consumer engagement also requires PHRs to become more usable and include easier data import and export tools.