e-MDs reports a 20% increase in revenue and a 10% increase in employee count over the last year. The company also says it was profitable for 2011, maintained cash reserves, and invested nearly 40% of its annual revenue into R&D.

CalHIPSO reports that over 7,700 enrolled providers are in various stages of EHR implementation, including 210 that have demonstrated MU. The REC also says it has initiated a second round of EHR vendor selection, building on its initial group of seven vendors.

MHMD, the physician network of Memorial Hermann Healthcare System (TX), begins work with TransforMED to transform six of its medical practices into PCMHs.

Advanced Data Systems collaborates with clinical laboratory LabXpress to offer an orders and results interface between ADS’s MedicsDocAssistantEHR and LabXpress. 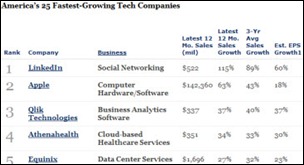 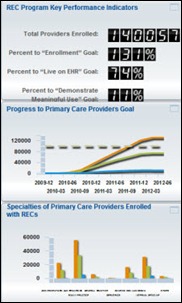 ONC launches the Health IT Dashboard, which presents key information about the impact of federal policies and programs related to HIT. I like pretty graphics, and this one detailing key performance indicators for RECs caught my eye. Although according to the numbers at the top, only 11% of providers enrolled in RECs have demonstrated MU, leaving me to wonder how that compares to the original goals of the ONC and RECs.

Sermo reveals that its Real-Time Medicine Mobile App for Physicians accounts for 45% of total traffic on its platform. One of the app’s most popular features is iConsult, which allows physicians to take or add a photograph at a patient’s bedside and ask for opinions from relevant specialists. Sermo says 77% of iConsults are answered within an hour and often as quick as one minute, with each inquiry averaging 12 responses. 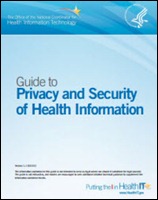 ONC releases a handbook for physicians and their practice staff that discusses the importance of privacy and security to EHR MU and how to integrate best practices into daily operations.