The AMA asks CMS to consider an additional one-year delay for the transition to ICD-10. Last month, HHS issued a proposed rule that would push the deadline back from October 1, 2013 to October 1, 2014. AMA believes that overwhelmed physicians need a deadline no sooner than October 1, 2015.

The percentage of doctors using tablets has nearly doubled since 2011, with 62% now claiming to use of some sort of tablet device. The Apple iPad is the preferred device for 81% of the tablet adopters.

A Texas ED doctor develops HealthCareWaitTime.com, a site that allows hospitals and physician offices to post patient wait times online and gives patients the option to schedule appointments and communicate securely with their providers.  Interestingly, Dr. Harvey Castro has developed more than 30 medical smartphone apps over the last few years.

The AMA submits a letter to CMS, asking for less-aggressive criteria to achieve Meaningful Use. Some of the specific suggestions: 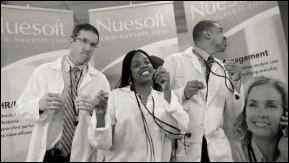 Here’s something fun to kick-start your week. Nuesoft creates a parody of Jay-Z’s “99 Problems” to highlight physician frustrations with the ICD-10 transition. If you’d like to be a music video star, Nuesoft is soliciting additional video clips and photos to be edited into the above video.