From Sleepless “Re: Practice Wise. Julie McGovern’s ‘One Project at a Time’ article was great! If only the business world really would acknowledge how much disruption it creates and the resulting levels of frustration.” Sleepless is referring to Julie’s recent post, which addresses the hard work of EHR implementations and how clinics would be prudent to avoid tackling multiple large initiatives simultaneously. She offers some great tips, beginning with:

If other initiatives must be tackled, try to stage the projects to preserve the sanity of everyone involved.

The one-year delay for the ICD-10 code set is confirmed by HHS Secretary Kathleen Sebelius and the new compliance date is October 1, 2014. Following the announcement, MGMA expressed concerns that HHS didn’t undertake due diligence to ensure ICD-10 won’t disrupt cash flows and recommended additional ICD-10 pilot testing before a full roll-out. Meanwhile, the AMA issued a statement recommending “CMS delay the move to ICD-10 by a minimum of two years.” 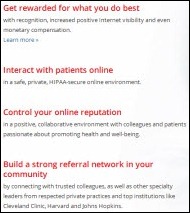 I read this profile on startup HealthTap and am not convinced of the model’s viability. HealthTap allows patients to pay $10 to have a secure, private conversation with a physician in a format similar to email. Patients can share documents and images and the doctor then analyzes the case. The patients can choose a physician to engage with “out of a million” in HealthTap’s database (or 14,000 licensed US doctors.) I understand how this could be attractive to a patient, though I have to wonder what kind of doctor would be willing to participate. The company says their site allows physicians to use their knowledge to “build an image” and as a business development tool. I thought we were facing a doctor shortage, not a patient shortage, so how many physicians – particularly quality primary care doctors – really need to recruit more patients? What am I missing?

More evidence of telemedicine’s growing popularity: in a survey of 440 mid to large size firms, 9% indicated they had plans to offer telemedicine consultations in 2013; another 27% are considering them for 2014 or 2015. 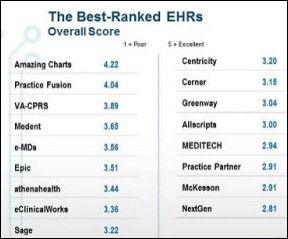 Seventy-five percent of 21,000 physicians participating in a Medscape survey say they use an EHR system, while an additional 20% plan to adopt one in two years. That sounds high to me, but adoption is no doubt trending up. The top-ranked EHRs among smaller practices were Amazing Charts, VA-CPRS, and Practice Fusion, while groups with 25 physicians or more favored VA-CPRS, Epic, e-MDs, and Medent. The most widely used EHRs were Epic, Allscripts, and Cerner.

Last week on HIStalk we mentioned some key items from the Stage 2 MU final rule, which was published last week. A few items impacting EPs include: