I am back home, drowning in emails, and feeling a bit stressed. On the one hand I kind of wish I could attend more conferences (RSNA and a few of the larger vendor meetings come to mind) but then my body reminds me how exhausting it is to learn and network all day, socialize and network all night, and then wake up way too early in the morning to write a post.

I already shared most of my pictures, but I managed to dig up a couple more goodies. Hang on for my somewhat rambling assortment of observations and impressions.

I’ll start with a shout out to all the HIStalk sponsors who displayed their signs in support of HIStalk. A big thank you to Vitalize, Sandlot, Capario, MedAssets, White Plume, Culbert, IMO, M*Modal, Versus, MedAptus, Gateway, SRS, eClinicalWorks, and IngeniousMed. I am quite sure there were more since my notes aren’t perfect (nor necessarily legible.)

I stood in line with a gentleman who ran an anesthesia-focused MSO and was surprised by his comment that most of his physicians used scribes in the surgical suite. Maybe that’s not particularly uncommon and I just incorrectly assumed most physicians in this area were entering their own notes.

I mentioned earlier that the Iatric rep produced a nice, concise elevator pitch. I also had a chance to meet CynergisTek CEO Mac McMillan, who was in the Iatric booth when I stopped by (the companies jointly offer an automated solution for monitoring access to patient data.) McMillan modestly shared that he is often an educational presenter on privacy and security for local HIMSS chapters and other professional organizations. I figured out later than he is actually chair of the HIMSS Privacy  & Security Policy Task Force, making him one of the authorities on the topic. I have thus added him to my list of HIT brushes with greatness. 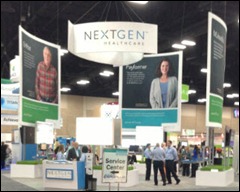 NextGen had a smaller and more open booth than I recall in years past. It was so welcoming that I decided I needed demo, having not seen their EHR in a few years. NextGen has long had a reputation as one of the premier ambulatory EHRs, and rightfully so. However, I must say I was a little disappointed in the product. Graphically it looks dated. Even though the gentleman doing the demo – who did an excellent job – was able to move around the system quickly any time I asked to see a particular feature, it seemed as if it took at least three to five clicks to navigate anywhere. I understand that the EHR has a great deal of flexibility in its templates, but the basic patient summary screen seemed lacking. For example, the default view did not show a patient’s complete history on a single screen. You could click on tabs to see problems, medications, and other detail but at a glance you could not determine if the patient actually had any data attached to those tabs. For a specialist it might be work perfectly well but I can see how a primary care provider could become frustrated with the workflow.

Meanwhile, I checked out CareCloud’s new EHR and I must admit it looked beautiful. Navigation was very intuitive with lots of drag and drop options and a look and feel similar to Facebook. I think they are on to something. However, the product was just released in January and currently fewer than 100 doctors are on the platform. The current templates seem better-suited for primary care and my impression is that for now CareCloud intends to focus on the core product, versus developing features to address the needs of every specialty. I also noted a few product gaps, such as limited clinical decision support utilities (the rep said they are still deciding whether to build or buy that functionality.) I should add that a doctor friend of mine looked at the product as well and was very impressed with the functionality, though was concerned that the company is still relatively young.

I suppose I knew this before, but after hearing a few MGMA-led sessions, it’s obvious the organization spends considerable time and effort lobbying for its members in Washington.

MGMA reports total attendance was about 5,100, including representatives from 356 exhibitors. On Monday I inadvertently Tweeted that attendance was 51,000 (what’s an extra zero here and there?) and was horrified the number was re-Tweeted multiple times before I noticed my error. Whoops. 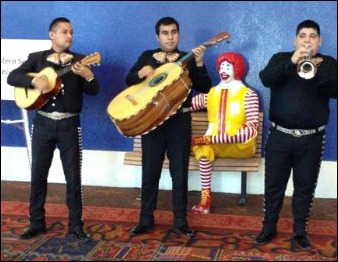 I had forgotten about this picture. These mariachi guys provided some Sunday afternoon entertainment in the convention center. I have no idea why Ronald McDonald was sitting on a bench in the middle of the convention center (I didn’t notice a  McDonald’s), but he was clearly enjoying himself.

I think I have a small gal-crush on MGMA president Dr. Turney. Not only does she like shoes, she is a self-proclaimed “data geek.” Got to love that.

Kudos to Gateway for donating $5 to breast cancer research for every badge swipe. 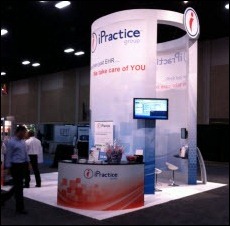 Here’s the iPractice Group booth, which was one of my favorites for its openness and good use of a relatively small space.

I took a peak at Intuit Health’s mobile patient portal app. Truth be told, Intuit had these fabulous foot massage chairs and I asked to sit in one. I was unable to see a regular demo from the massage chair so the sales guy handed me his iPhone and let me walk through it on my own. I wish my physicians had something similar for appointment scheduling, prescription refills, and sending secure communications. It was super easy to use. And the foot massage was incredible.

Intuit was not the only vendor offering patient engagement tools. I attended a session on healthcare social media with David Harlow of the Harlow Group and I believe he was the one who pointed out that new federal laws will continue to drive patient engagement. Not surprisingly both niche vendors and the traditional EHR/PM companies were promoting patient engagement options, including mobile versions. 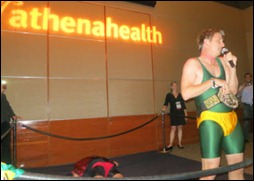 I sat down for a few minutes with athenahealth CEO Jonathan Bush. He was his typical irreverent and rambling self – and happened to be wearing Batman cuff links. I will be writing up a separate summary of that conversation.

A few of the vendor announcements this week include: