From Sleepless: “Re: Priorities. The customer should be the priority, but you know how people are programmed to cater to doctors’ schedules and timelines. It is as though we are living in the 1950’s. I also find it offensive when I call the doc office or pharmacy and get the recording that says doctors press 1 and the rest of you press 2.” Apparently I am not the only one who is annoyed by office staff that seem to believe their doctor’s time is more valuable than mine. As another reader pointed out, the staff’s priority should be to assist, “the one with cash in their hand.”

eClinicalWorks has signed up 1,000 providers to its RCM during the first six months of 2013 and is projected to reach $100 million in revenues by 2015. eCW offers the service for 2.9 percent of monthly collected revenues and includes EHR. 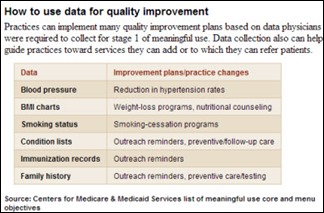 An American Medical News article discusses ways that practices can use patient data from EHRs to  impact the way care is delivered and identify improvements on the business side. For example, EHRs help practices identify patients in need of preventative care, facilitate the management of chronic care cases, and monitor outcomes. To improve population health, experts recommend using Meaningful Use measurements as a guide and selecting target measures from the 64 included in Stage 2.

The AMA votes to lobby CMS for a two-year grace period to avoid complying with the ICD-10 transition, despite the announcement last week by ONC head Farzad Mostashari, MD that there will be no additional ICD-10 delays. 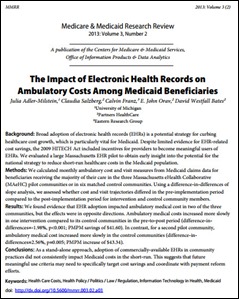 A CMS study concludes that adoption of EHRs in community practices doesn’t necessarily decrease costs, but can facilitate either increases or decreases in costs depending on how the EHR is used and the context in which it is used.