From Le Patron: “Black Book report on EHR vendor consolidation. They are spot on. There are too many vendors and way too much physician dissatisfaction to support the status quo. The specialty physicians are especially dissatisfied with the one-size-fits-all vendors. I’ll give you $1,000 for every specialist satisfied with one of the big name vendors if you give me $1,000 for each one who is dissatisfied. I’d be a rich man.” Neither vendor consolidation nor user dissatisfaction are surprising, but don’t put all the blame on vendors. Vendors have had to shift their development priorities to MU and other mandated programs, while workflow enhancements and usability updates have been pushed to the back burner. More vendors, large and small, will be forced to sunset products as ongoing development costs are either deemed unsustainable or not practical , especially for vendors offering multiple EHRs. Look no further than Allscripts MyWay and Mitochon as great examples. 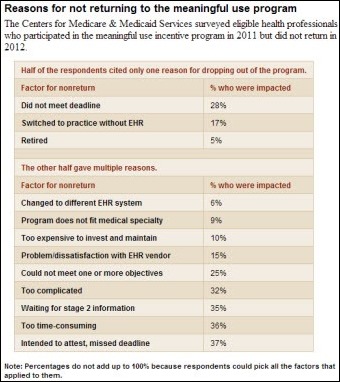 Earlier this month I mentioned the 17 percent drop in EP participation in the MU program from 2011 to 2012.  CMS asked EPs why they had dropped out and learned many felt the program was too time-consuming or too complicated; others claimed they were waiting for Stage 2 requirements; and, more than a third claimed they intended to attest but missed the deadline.

CIOs and IT system directors in medical groups report median compensation increases of more than seven percent since 2011, according to the MGMA. Compensation for physicians, by the way, grew about three percent from 2011 to 2012.

If House lawmakers have their way, physicians will see five years of 0.5 percent increases in Medicare payments starting next year. The proposed bill repeals Medicare’s SGR payment formula and replaces it with a system based on quality and efficiency, starting in 2019. Physicians choosing to stick with traditional fee-for-service compensation would see a permanent five percent cut after 2018.