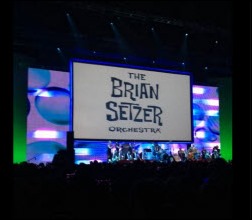 From Bob Christgau: “Re: NextGen User meeting. I thought the meeting itself was great, though the bands were terrible.The opener was the Brian Setzer Orchestra (and I actually like them) but it was so loud and distorted it was not enjoyable. The second act was Big and Rich who were clearly already drunk before they started the performance, which forced me to retire to the bar.” I wonder if vendors would be better off spending their money on a great cover band like Vitera did at MGMA. I recall a few great entertainers (Zac Brown and Colbie Caille come to mind) during HIMSS parties, but I also remember looking for the nearest exits during a couple user group meetings featuring pathetic performances by Kasey and the Sunshine Band and a tired Loretta Lynn.

An IDC Health Insights report highlights disturbingly high levels of physician dissatisfaction with their ambulatory EHRs. In a relatively small survey of 212 providers, 58 percent said they were very dissatisfied, dissatisfied, or neutral about their EHR. The providers, which included both PCPs and specialists, used over 25 different EHR products and cited lost productivity as the biggest problem with the technology. The top reasons for EHR satisfaction were a reduction in lost or missing charts, the ability to access charts remotely, and incentive payments.

Also disturbing: this essay by an Alabama physician who describes the inefficient and cumbersome EMR she uses to document a visit with a dementia patient suffering knee pain. Based on the results from the above survey, there must be plenty of EMR users with similarly clunky systems; however, I know of plenty of products that sound far more user-friendly than the one she is using. If you are a provider or a vendor, please assure me your product is more efficient. 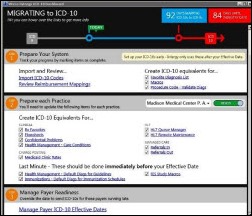 Greenway Medical releases Intergy v9.00, which includes a dashboard to track the progress of a practice’s transition to ICD-10 or MU attestation. It may take me awhile to get used to the new Greenway/Intergy name combination.