From Boeing: “Re: McKesson Seattle. McKesson is closing its Seattle office, the original home of Practice Partner, the EHR product McKesson acquired several years ago.” While not officially confirmed by McKesson, Boeing provided us with internal McKesson communications as verification. Apparently McKesson intends to continue distributing, supporting, and developing the Practice Partner EHR and will allow Seattle support personnel to work remotely from home. Some development staff are being asked to relocate to Atlanta. 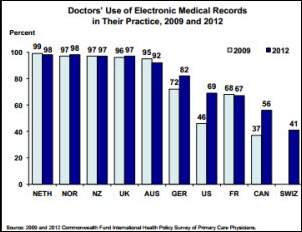 Two-thirds of US primary care physicians reported using EMRs in 2012, up for 46 percent in 2009, according to findings from the 2012 Commonwealth Fund International Health Policy Survey. In comparison, more than 90 percent of primary care physicians in the Netherlands, Norway, New Zealand, the UK, and Australia reported using EMRs in 2012. More than a third of US physicians allow patients to request prescription refills online or email medical questions.

CareCloud and Quantia name Bernard Abbott, MD, CMIO of Family Health Centers (MD), the winner of their Health IT Case Study Challenge contest based on the organization’s success using technology to improve the practice’s financial and operational health.

Texting while doctoring could create a patient safety hazard, according to an opinion piece in the Annals of Internal Medicine. Physicians typing in an EHR during a patient encounter may miss signals of depression, disagreement, and lack of understanding. The physician-authors blame Stage 2 MU criteria, which require doctors to type in their own orders, and suggest a technologically-supported, team-based model of care may allow physicians to give patients their undivided attention.

Outpatient physicians report more emotional exhaustion than inpatient physicians according to a review and meta-analysis of 54 studies on physician burnout. Personally I always find a teeny bit of comfort (not to mention smugness) knowing that I really do have it worse than the next guy..