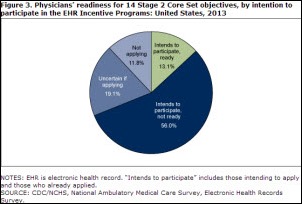 In 2013, 78 percent of office-based physicians used some sort of EHR, up from 18 percent in 2001, according to the CDC’s National Center for Health Statistics. Other key findings:

Provider engagement and administrative issues present the biggest challenges to practices adopting and implementing EHRs, according to data collected by 55 RECs throughout 2012. The most challenging MU measure:clinical summaries measure.

Office Ally reports that more than 11,000 providers now use its EHR 24/7 product.

A Cleveland Clinic survey reveals that what aggravates patients most about their doctor is having to wait a long time in their office. Other complaints: doctors sharing details of patients’ medical histories with others; feeling rushed by their doctor; and limited office hours. Overall what patients want most from their doctors is empathy.

eClinicalWorks CEO Girish Navani discusses his management style in a New York Times interview and explains why titles don’t matter. He also mentions that he often works at a conference table right outside his small office. I visited the eCW headquarters in 2011 and in my write-up of the visit I mentioned that setup, which I thought suggested “the availability and willingness of execs to be in the trenches with their employees.”

CMS offers EPs the opportunity to participate in the  2013 PQRS-Medicare EHR Incentive Pilot, which allows providers to meet the clinical quality measure reporting requirement for the Medicare EHR incentive program through electronic submission while also reporting for the PQRS program. Participating EPs have until February 28 to submit 12 months of CQM data.