Has HIT Jumped the Shark?

Watching the world of HIT of late, I’ve been wondering if it may have “jumped the shark.” You know what that is, right? It’s the phrase coined by Jon Hein (Howard Stern Show) after an episode of the TV show “Happy Days” where Fonzi (the coolest, black leather-jacketed, semi-tough tough guy on the planet at the time) was shown on water skis jumping a shark. Gimmicky stuff, for sure, used in an attempt to keep the show’s audience, and revenues, intact. The term denotes the moment in the life of a TV series where quality begins to decline, but has since broadened in usage. It generally denotes when something – a tool, a brand, an offering, a design – has begun its descent from wondrous to woeful. 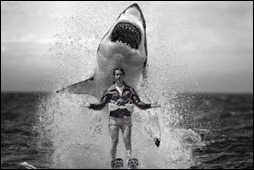 Is it fair to derogatorily tag HIT with this? Perhaps not, especially when there are definitely some folks are out there doing some pretty amazing things in the HIT space. One really cool example is the stuff Dr. Patrick Soon-Shiong is doing with his bazillions of dollars tying disparate systems together and creating true change in the status quo. And there are several pretty cool newish EMRs/EHRs as well as improving patient portal and PHR-type tools.

However, in the mainstream of HIT, many of the big systems and players seem to have been so redirected by the needs to meet criteria of regulatory design – you know the culprits: Meaningful Use, ICD-10, etc. – that the lovely innovation that once bubbled throughout the industry doesn’t percolate much at all these days. The excitement that used to be almost palpable in HIT seems faded, like it’s become less about innovation and more about institutionalization.

I’ve been looking around at EHR/EMR systems quite a bit lately, checking newer offerings and revisiting older systems I haven’t seen for a while. What I’ve seen has been, by and large, depressingly similar to what I saw ten years ago. Outlook-y systems. Windows 95-y systems. Excel spreadsheet-y systems. There are some that have moved the needle for user experience, but most older systems still look and feel…well…older.

User interfaces in many of today’s more well-established systems look much the same as they did ten years ago, despite all that’s been learned about optimization of the user experience. Workflows and process management are similarly stagnant. There’s almost an attitude of “well, if it’s working enough for our many users, we don’t need to worry about it.” But, this doesn’t mean it’s good.

It may be heretical to mention this as we approach the 2014 HIMSS extravaganza. Despite my sense that there may be some shark-jumping going down, HIMSS rolls on bigger and grander than ever. The mega-bucks are flowing and the shows will be glowing. You’d have no hint that anything was less than lovely in the land of HIT.

But, even Happy Days lasted another five years or so after Fonzi waterskied over a shark. It isn’t a death knell, but it definitely isn’t a sign of good things to come. Once a shark gets jumped, the effort to maintain the prior luster is like applying Bondo to a rusted Roll Royce: its former glory is behind it without some serious restoration.

I’m sure the HIT show will roll on for years to come, but maybe we need some new writers.

“I think the phrase ‘jump the shark’ has jumped the shark.” – Linda Edelstein

Dr. Gregg Alexander, a grunt in the trenches pediatrician at Madison Pediatrics, is Chief Medical Officer for Health Nuts Media, an HIT and marketing consultant, and sits on the board of directors of the Ohio Health Information Partnership (OHIP).