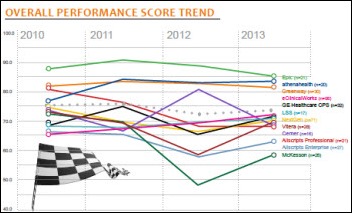 A new KLAS report says Epic, athenahealth, and Greenway lead the 11-75 physician practice segment. Allscripts, McKesson, and Vitera have the highest percentage of unhappy customers who will stick to the EMR they bought even though they wouldn’t buy it again. Other notable findings:

Researchers find EMRs helped to improve the identification and follow-up of infants born to mothers with hepatitis C virus infections. The study, which was published in The Pediatric Infectious Disease Journal, found that utilizing certain EMR features, such as problem lists, electronic messaging, and test monitoring contributed to an increase in identification rates from 53 to 71 percent and follow-up rates from eight to 50 percent.

Kareo intends to grow its marketing and sales efforts following the closure of  $29.5 million in growth capital, led by Greenspring Associates.