From Ross Thomas: “Re: HIT vendor series. I was surprised by the quality of the responses from one or two of the folks (all men, I noticed), but not at all surprised by a few.” It makes me sad that not one of the 12 vendors had a female executive participate. Was this just a fluke or are women in HIT still hitting the glass ceiling in middle management? As to Ross’s veiled comment on quality, I think it’s fair to say that too often vendors obfuscate their message by incorporating too much marketing-speak and not enough straight talk. That being said, I enjoyed reading all the contributions and found many to be very enlightening. Thanks to all the participants.

In a case considered a key test of the FTC’s efforts to block hospital acquisitions of doctor groups, a federal judge rules that St. Luke’s Health System (ID) must divest itself of the 40-doctor Saltzer Medical physician group. The judge found that the hospital’s ownership of 80 percent of the primary care doctors in Nampa, ID would give the health system an unfair bargaining position with insurance companies, even though the intent of the merger was to improve patient outcomes. The ruling marks the first time the federal courts have decided an FTC case against a physician practice deal. 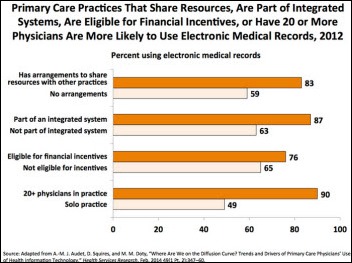 Despite the considerable rise in EHR adoption in physician practices between 2009 and 2012, solo physicians lag behind larger groups in terms of implementing certain functions, such as electronic data exchange with other providers. Overall EHR use by primary care physicians rose from 46 percent in 2009 to 69 percent in 2012 according to a Commonwealth Fund study, but EHR adoption in solo practices remained below 50 percent. Physicians associated with integrated delivery systems had the highest rates of HIT adoption.

An AHRQ-sponsored study finds that adding telemonitoring to the routine care of primary care patients with diabetes did not significantly change outcomes. 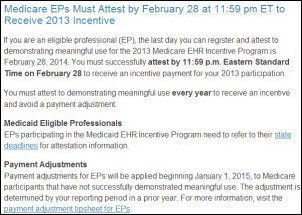 CMS reminds EPs that the last day to register and attest to demonstrating MU for the 2013 Medicare EHR incentive program is February 28, 2014.

CareCloud ranks 28 and Kareo 65 on Forbes annual list of America’s 100 Most Promising Companies, which includes high-growth, privately-held companies with under $250 million in revenue.

Doctors spend about one-third of their time looking at their computer when using an EHR in an exam room, according to a study published in the International Journal of Medicine. Researchers conclude that when doctors spend that much time focused on their EHR, patients have difficulty getting their physician’s attention and physicians are less able to listen, problem-solve, and think creatively.