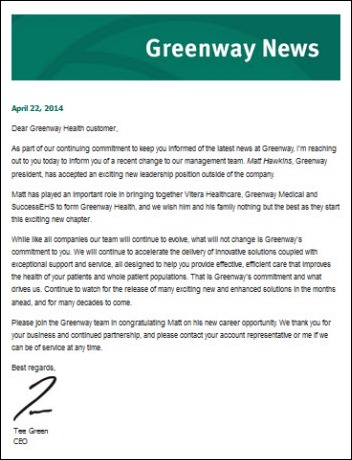 Greenway Health President Matt Hawkins is leaving the company to pursue “an exciting new leadership position outside of the company,” according to an email sent to Greenway customers Tuesday. The departure of Hawkins, who was CEO of Vitera Healthcare prior to the Greenway/Vitera merger, could be unsettling for any Intergy customers already concerned about Greenway’s long term product strategy. I emailed the company for a comment but have not yet received a response.

Athenahealth resigns from the HIMSS Electronic Health Records Association (EHRA) trade association saying it “never really belonged” since it is neither an EHR company nor a software vendor. In a company blog post, Dan Haley, athena’s VP of government affairs, says that because many EHRA members are unable to meet MU timelines and standards, the organization “consistently urges slower timelines, delayed deadlines, and lower bars” than athena. Given the collaborative ideals of EHRA, I think athenahealth might have been better served to simply say, “we aren’t a good fit” rather than throwing in the disparaging comments.

Forbes profiles Surescripts and its evolution from an “alliance of foes” to its current status as the dominant e-prescribing network. I vaguely knew that the company had been involved in a few mergers over the years but hadn’t realized the extent to which its success is based on the alignment of adversaries. Forbes notes that EHR vendors, who have traditionally been reluctant to facilitate the exchange of patient information, could possibly learn a lesson or two from Surescripts and its creators. 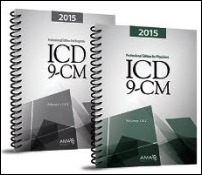 The AMA reminds providers to pre-order the 2015 edition of the ICD-9 codebooks, leading me to contemplate the wide-sweeping impact of the ICD-10 delay. Both providers and vendors are having to reassess everything from training and staffing to marketing and product development. I’m thinking if I were an ICD-10 coding expert I wouldn’t mind having another skill in my back pocket, at least for the short term.

Athenahealth reports that 95.4 percent of its participating providers successfully attested for MU Stage 1 in 2013. CMS will release overall industry attestation rates in the next month.

ZirMed introduces Clinical Link, a HIPAA-compliant secure messaging tool that enables ZirMed users to exchange messages and clinical documents with other provider organizations, regardless of their EHR or PM system.

CVS MinuteClinic says it has surpassed 20 million patient visits since opening its first store-based clinic in 2000 and expects to add 150 new clinic locations in 2014.