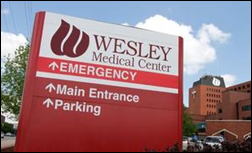 Private physicians working in the Wesley Medical Center ER face an ultimatum that will likely become all too common as hospitals look to streamline via direct-employment relationships: Become employees of WMC’s staffing vendor, EMCare, or lose their jobs at the hospital. Mark Mosley, medical director of WMC’s emergency department, believes the hiring situation will put patients at risk: “We tried to explain to the administration the relationship we have with physicians in the community, the relationships with nurses, and the kind of patient care we give is not something you can fly in from out of town and buy. It’s created from years of teamwork. When you take that away, you potentially put patient care at risk.” The ER physicians, part of the Emergency Services Professional Association, have until September 3 to make a decision.

A  VA self-audit of 731 facilities finds that 13 percent of schedulers were told to enter desired appointment dates different from what the patient requested, eight percent of facilities kept external scheduling lists invisible to the VA’s EWL/VistA systems, and unrealistic targets encouraged facilities to game the system. New patients waited up to three months to see a doctor. The VA announced immediate changes: eliminating the 14-day appointment target as unreasonable, implementing real-time patient surveys, conducting an external audit, freezing new hires and eliminating bonuses at VA headquarters and regional offices, and creating an HR team to get clinicians hired faster. It also plans to implement a new scheduling solution to work within its VistA EHR, according to statements made by VA CIO Stephen Warren at a recent Senate hearing. Meetings with industry are scheduled for next week, and the agency hopes to have a product in place by the close of fiscal 2015. 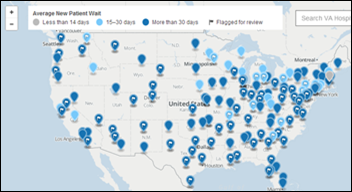 In the mean time, the VA releases an interactive map showing average wait times for new patients. Only one facility stands out as having wait times of less than 14 days.

The local paper notes that Hill Physicians Medical Group (CA) is “making bank on health reform.” The group achieved over a half billion dollars in revenue for the first time, reaching $505.2 million in 2013. HPMG attributes the revenue to cost-of-care savings associated with its participation in three ACOs that same year. Two more were added in 2014. Perhaps that “bank” will be used to fund HPMG’s investments in technology that will be used to improve the way it pays claims to doctors and to transition to ICD-10.

Napersoft announces support of EHR summary documents for patient portals, enabling patients to securely view, download, and transmit their data while helping physicians meet multiple Meaningful Use objectives. Napersoft’s CEO, Bart Carlson, was featured in a recent issue of CEOCFO magazine, where he pointed out that healthcare is one of the company’s biggest areas of opportunity.

This headline takes the cake when it comes to healthcare acronyms the average lay person probably wouldn’t understand. CECity announces that CMS has recognized 10 of its qualified clinical data registry collaboratives for reporting under the Physician Quality Reporting System.

The Medical Society of Northern Virginia launches the HeaLiXVA HIE that, in its first phase, will enable Fairfax Family Practice, Loudoun Medical Group, Sunrise Medical Laboratories, and Solstas/Quest Laboratories and Radiology Imaging Associates to connect. A second phase will connect local hospital systems. Physicians can subscribe to the new HIE for $25 per month, though EHR integration fees are not included. It’s somewhat refreshing to hear about a HIE just getting off the ground, when so many seem to be running out of grant money and closing up shop. 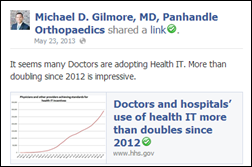 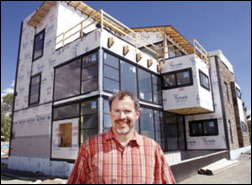 The local paper profiles Allen Gee, MD and the virtual telemedicine practice he has established at five clinics across Wyoming. Gee, who was awarded the 2014 Vision Award from athenahealth, is in the process of opening a sixth clinic where patients will be able to check in via handheld devices. 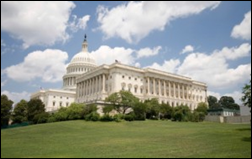 Sue Bowman, AHIMA’s senior director of coding policy and compliance, outlines top priorities healthcare organizations should focus on leading up to the new ICD-10 compliance date during recent testimony in Washington, D.C. They include: 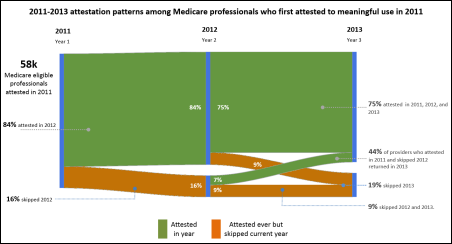 Statistics presented at Tuesday’s HIT Policy Committee meeting indicate that of EPs who first attested for Meaningful Use in 2011, 84 percent attested in 2012 and 75 percent in all three years of 2011, 2012, and 2013. Nearly half of those who attested the first year and then skipped 2012 returned in 2013. EHR incentive payments totaled $24 billion through the end of May.

Practice management and population health technology vendor Privia Health appoints Andrew Aronson, MD chief medical officer. Aronson will work closely with the physicians of the company’s multispecialty Privia Medical Group (VA) to improve coordinated care value and quality. Privia’s business model is an unusual one. The practice management and population health technology vendor’s clients  came together at the beginning of this year to join the Privia Health brand through the formation of PMG.

Thanks to Dr. Jayne for mentioning that the call for proposals for HIMSS15 is open through June 16. As she points out, that’s nearly 10 months before the actual conference, decreasing your chances of seeing presentations that are fresh and timely. Submitters beware: A user name and password is required, and the submission website works well only with certain versions of certain browsers. Good luck!

The City of Bullard, Texas, renames a portion of Hwy. 69 as N. Doctor M Roper Pkwy, honoring 93-year-old Marjorie Roper, MD. Roper opened Bullard Medical Practice in 1947 in the back of her father’s drugstore, where she practiced medicine for 60 years. 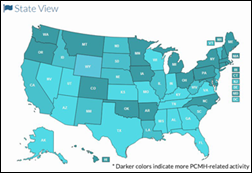 The Patient-Centered Primary Care Collaborative releases the Primary Care Innovations and PCMH Map, which allows users to identify where medical homes are becoming a standard of care in commercial and public-sector health plans. Nearly 500 initiatives are tracked.

Jim Morrow, MD is CEO of Morrow Family Medicine (GA), Medical Director of IntelliChart, and sits on the boards of the Georgia Health Information Network HIE and the Institute for Health Information Technology. As MFM’s only physician, he sees between 50 and 70 patients a day with the help of a PA. MFM also includes two MAs and three ancillary staff members. He has used an EHR from Allscripts since 1998.

How has healthcare IT, such as your EHR, impacted your practice? Any before and after anecdotes to share?

Where are you with Meaningful Use? As an independent physician, have you benefited from the program, or found it overly burdensome?
I have attested three times, for Stage 1, and received three checks. The EHR reporting module makes this very easy, giving me essentially all the info I need to attest.

What other healthcare IT/clinical programs are you participating in at the moment?
I participate in the Physician Quality Reporting System, along with MU. I’ve received checks every year from them for doing this.

Has healthcare IT enabled you to remain independent?
It plays a large part. It takes a lot of admin burden from me and helps me be as efficient as possible, keeping me from having to join a hospital network.

What are your thoughts on the ONC’s 10-year vision statement for interoperabilty? Do any parts of its plan jump out at you as having significant impact on private practices?
My main thought about the plan is that this is something that should and COULD have been done already. I have preached to anyone who would listen that this is not a technology problem. It is a people problem. People in decision-making seats have just not felt it was worth their money or time to work with others to interoperate. It will be so easy to make happen when vendors and users decide that it is important enough to go ahead and do.