Practice Fusion names Tom Langan permanent CEO. Langan, who joined the company in mid 2014 as chief commercial officer, had been interim CEO since August. Langan’s title jump caused a bit of an uproar, with some  insiders speculating that the ouster of former CEO Ryan Howard was a board decision rather than a personal one on Howard’s part. At the time, rumors swirled that the company was preparing for an IPO, a development that might be escalated now that Langan seems to have found his permanent footing in the C-suite. 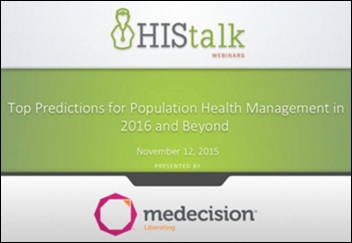 November 20 (Friday) 2:00 ET. “The Athenahealth Leadership Institute Presents: Dr. John Halamka Interviewed by Jonathan Bush.” Sponsored by Athenahealth. Presenters: John Halamka, MD, MS, CIO, Beth Israel Deaconess Medical Center; Jonathan Bush, CEO, Athenahealth. Providers are fed up with interface fees and the lengthy, fragmented narratives we’re exchanging today. But what is the right course of action to help deliver better care across the continuum? Bring your questions as we join Dr.Halamka and Jonathan Bush to discuss the current state of healthcare and how we can improve care coordination and interoperability.

The Canada-based Centre for Effective Practice will offer its evidence-based tools and programs via CognisantMD’s Ocean Platform, which acts as an interface between patient tablets, secure messaging, and data collected in EHRs. The integration will launch with CEP’s patient poverty screening tool, followed by an opioid manager and lower-back pain screening tool. 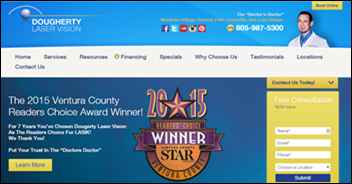 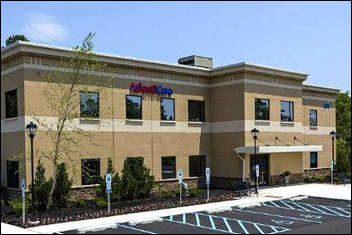 AtlantiCare implements online scheduling via ZocDoc for its primary care and specialty physicians. 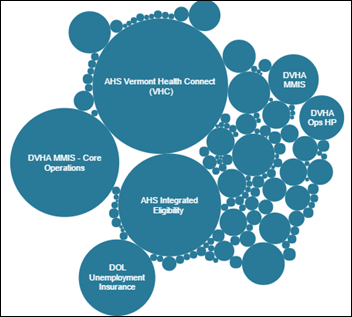 Newly released documents show that the State of Vermont has invested $1.3 billion in 132 IT projects, the bulk of which focus on healthcare. Coming in at just over $866 million, healthcare IT projects include the ongoing development of the Vermont Health Connect insurance exchange, which is set to cost $302.3 million to implement and maintain between this year and next. It’s the state’s most expensive project to date. 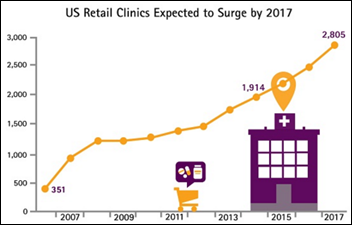 Accenture expects the number of retail clinics to increase 47 percent, at a minimum, between 2014 and 2017, creating capacity for 25 million patient visits. The forecast validates Walgreen’s recent decision to move its Healthcare Clinics over to Epic. The company, which currently operates over 400 clinics, wouldn’t share with me its expansion projections for the coming year (or the cost of the implementation), but I think it’s safe to assume that the big bucks it’s spending will not just be for its current locations.

Scottsdale, AZ-based HealthiestYou secures a $30 million investment from Frontier Capital. The company will use the cash infusion to ramp up sales and marketing efforts to employer groups, expand its executive team, and develop its technology to capture more of the telemedicine market. 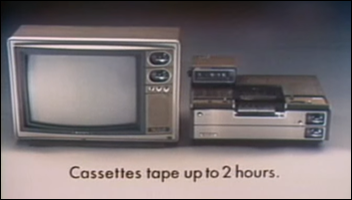 Because I know you were wondering: Sony finally decides to discontinue Betamax, the long-ago competitor of VHS tapes. The company halted production of Betamax players in 2002, but carried on making tapes for Japanese recording studios and die-hard fans of the outmoded technology. As Quartz points out, “Betamax was never granted a hipster revival.”