From Chip Hart: “EMR features. I note a disturbing trend of boiling down the quality of an EHR to its stated sum of features. This is a huge mistake and leads to the high dissatisfaction rate docs have with their first EHR purchases. Your chosen EHR should be more about workflow, customer support, and where they will be in five years. Bells and whistles are almost meaningless.” Chip’s comment is in response to a reader’s recent inquiry about the differences in EMR features for large versus small practices. I think his comment is spot on. I’d add that references and site visits are also critical in selecting an EMR. The references should be similar in size to one’s own practice and specialty and not necessarily from the select list provided by the vendor. 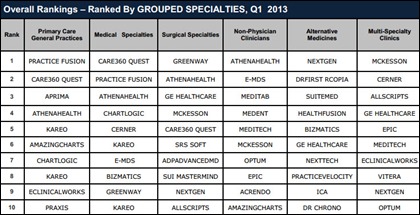 The EMR replacement market is predicted to be hot over the next year, according to a Black Box report. Up to 23 percent of physician practices claim they will replace their current EHR technology, with 81 percent of those saying the change will happen within the next year. Vitera, Practice Fusion, Care360 Quest, Cerner, Greenway, GE Healthcare, ChartLogic, and athenahealth were named the “top performing EHRs based on the EHR components that improve practice productivity and profitability.” The ONC reports that about 300,000 EPs have attested for MU, so if Black Box is right, a bit of math suggests that a minimum of 55,000 providers will be looking to replace their existing EMRs within the next 12 months.

MGMA submits a letter to HHS Secretary Kathleen Sebelius expressing concerns about Medicare’s decision not to conduct ICD-10 testing with external trading partners, including physician offices, and asking for a reversal of the policy. MGMA says the failure to change course would decrease the potential for a “catastrophic back-log of Medicare claims following the Oct. 1, 2014 compliance date” and could result in “significant cash flow disruption for physicians and their practices, and serious access to care issues for Medicare patients.”

e-MDs recognizes six of its clients who have been selected by the ONC as either as an HIT Champion or MU Vanguard.

NextGen will offer LDM Group’s healthcare messaging platform to its NextGen EHR clients. NextGen also announces it will integrate is Ambulatory EHR with Florida Blue and Availity to make patient-specific clinical information available at the point of care to both providers and payers concurrently.

Social media experts recommend physicians maintain at least a “minimal presence” online in order to enhance their practices and protect themselves from unfair criticism. Accenture’s Frances Dare suggests physicians monitor their digital footprint to see what patients are saying about them; have a Website with a blog; and,  open a Twitter account to post practice updates and general health reminders.